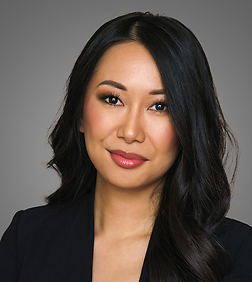 Eve Nguyen is an associate in the Entertainment, Technology and Advertising Practice Group in the firm's Century City and New York offices.

Eve counsels entertainment clients at every stage of production, from development through distribution. In addition to frequently negotiating high-profile first look and overall agreements, rights acquisition agreements and talent agreements, Eve is adept at handling financing, co-production, shopping, attachment, production services and distribution agreements. By also acting as outside business affairs advisor and counseling on fair use and copyright law, she provides clients with expert advice at each step of the creative process.

Eve is passionate about increasing diversity in entertainment and works with various industry organizations to advocate for culturally authentic representation. She serves as lead counsel to the firm’s pro bono client, the Coalition of Asian Pacifics in Entertainment (CAPE), and regularly speaks on panels aimed at amplifying diverse emerging talent.

Prior to joining Sheppard Mullin, Eve was an entertainment attorney at a boutique law firm in New York City and a corporate associate in the Capital Markets Group at Debevoise & Plimpton LLP.

Eve is based in the firm’s Century City office and maintains a presence in New York City, where she began her legal career. Eve is admitted to practice law in both California and New York.