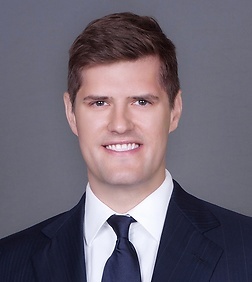 Patrick McGill is an associate in the Intellectual Property Practice Group in the firm's San Diego (Del Mar) office.

Patrick also has unique perspective as a former in-house attorney, having served as the general counsel of Meta Company – a pioneering startup in the augmented reality field.  At Meta, he built an industry-leading patent and trademark portfolio, drafted and negotiated a variety of commercial and partnership agreements, managed several patent and trade secret litigations, helped raise and close over $100 million of venture capital and debt, and managed corporate governance matters. Through this work, Patrick acquired a deep understanding and familiarity with the legal challenges that both startup and established technology companies face as they seek to develop an IP portfolio, clear the legal and logistical hurdles to bringing new products to market, and seek to acquire and defend market share.  Patrick applies this experience in private practice, serving as outside general counsel to a number of the firm’s clients.

Pro bono is an extraordinarily important part of Patrick’s practice. Patrick is a member of the firm’s Pro Bono Committee, and he has a leadership role in Sheppard Mullin’s partnership with Georgetown University Law Center’s Active Bystandership for Law Enforcement (ABLE) Project.  Through the ABLE Project, Patrick works to encourage police understanding of the duty to intervene to stop constitutional violations, as well as to facilitate the ongoing development and standardization of the law relating to the duty to intervene across all U.S. federal circuit courts.  Additionally, Patrick represented Tennessee death row inmate Andrew Thomas in the post-conviction appeal of his state and federal sentences (including before the U.S. Supreme Court), and co-authored the habeas corpus petition that led to Mr. Thomas’s death sentence being vacated under Brady v. Maryland, 373 U.S. 83 (1963).  See Thomas v. Westbrooks, 849 F.3d 659 (6th Cir. 2017).  Patrick also obtained resettlement in the U.S. for a Somalian refugee whose family was murdered by al-Shabaab, asylum for a Ghanaian refugee fleeing persecution due to his sexual orientation, and special immigrant juvenile status (SIJS) for three minors from Central America.  He currently represents individuals from Venezuela and Iraq who are seeking permanent immigration status in the United States for themselves and their families.

Patrick is an active writer and commentator, especially in the augmented reality field, having been invited to present before the U.S. Patent and Trademark Office (USPTO), and the U.S. Senate Committee on Commerce, Science and Transportation.