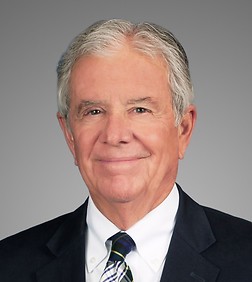 Bob Copeland is a Special Counsel in the Corporate Practice Group in the firm’s San Diego office.

Bob practices in the area of corporate law with an emphasis on corporate finance, securities, real estate and mergers and acquisitions. He also is ready and able to assist business owners seeking a liquidity solution in locating financing and acquisition sources. He has served as an expert witness in several litigations involving complex business, partnership and tax disputes. Bob also holds a certificate from the National Conflict Resolution Center in advanced mediation and is available to mediate complex pre-litigation and litigated matters.

Bob has extensive experience in representing and advising individual owners and the boards of directors and executive leadership of companies concerning corporate governance, securities, and corporate law and real estate law transactions.

He has led numerous corporate finance, recapitalization and initial public offering transactions. He has extensive experience and expertise in representing targets, as well as strategic and financial buyers in mergers and acquisition transactions both within the U.S. as well as in Europe, and the Middle East.

Bob’s clients cross over many industries, from start-ups to seasoned businesses:

Bob acted as outside general counsel for the 1995 defense of the America’s Cup and was on the firm team representing the City of San Francisco which hosted the 2013 America’s Cup. Bob advised USA45 Racing LLC, which was one of the two US teams entered in the Red Bull Youth America's Cup which was held in conjunction with the 2013 America's Cup event in San Francisco in late summer, 2013. He advised the Extreme San Diego-OC sports joint venture which presented an extreme sailing regattas in San Diego during October 2017 and 2018. The events featured very high speed foiling 32 foot catamarans.

Bob also takes assignments as an expert witness in cases involving transactional issues and as a mediator of disputes among parties to civil suits.

Bob has been listed in the national legal directory, The Best Lawyers in America every year since 1987, and in the Best Lawyers in San Diego (San Diego Magazine, April 2001-2021). He was named a Super Lawyer for San Diego (2007-2019). He received the Albert Nelson Marquis Lifetime Achievement Award (Marquis Who’s Who) in 2017.

Board Member, Any Body Can Youth Foundation