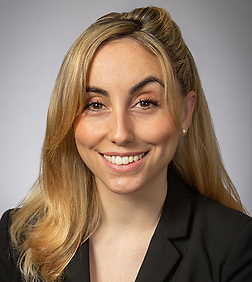 Katherine Anne Boy Skipsey is an associate in the Business Trial Practice Group in the firm's New York office.

Katherine Anne represents clients in civil and commercial litigation, as well as government investigations. She speaks native Spanish and proficient German and is a member of the Latin American and Appellate Practice.  She has four years of working experience in regulatory compliance and anti-money laundering background in cross-border banking.  As part of her training at Sheppard Mullin, she also previously worked at a multinational financial services corporation’s in-house legal practice.

Katherine Anne is also committed to representing pro bono clients. She sits in the Pro Bono Committee.  She recently represented a child with disabilities in a mediation where she reached a settlement with a state-sponsored therapy center to provide compensatory services for the child.  She also recently argued and won an appeal in a child custody and support case. She is a member of the New York Diversity & Inclusion Office Working Group.

While in law school, Katherine Anne did two judicial internships in the New York State Court of Appeals and Supreme Court. She worked in the Federal Litigation Clinic, where she argued a client’s case before the United States Court of Appeals for the Second Circuit. She also served on Fordham Law School’s Moot Court Board as an international Jessup competitor, winning best brief in the regional rounds and ranking eighth in the world in the international preliminary rounds, and First Amendment editor. Additionally, she was a Trial Advocacy Team competitor and an associate editor of the International Law Journal. She is a member of Fordham Law School’s Recent Graduate Committee.