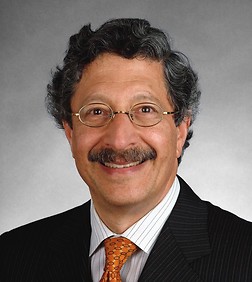 Robert J. Uram retired as partner and became Of Counsel in 2017 in the Real Estate, Energy, Land Use & Environmental Practice Group and the Food and Beverage Team in the firm's San Francisco office.

Robert has worked on complex and difficult wetlands, endangered species, water quality, land use, mining, public lands and habitat conservation issues. Robert has helped clients on projects throughout California, including the San Francisco Bay Area, Sacramento Area, Central Valley, Inland Empire, Central Coast and Southern California as well as in Guam, Nevada, New Mexico, Colorado and Mississippi. Robert promoted habitat protection as part of development and played a key role in the adoption of habitat conservation plans in California. He is a recognized expert in the National Environmental Policy Act (NEPA), the Endangered Species Act, and the Clean Water Act.

President Clinton appointed Robert as Director of the Office of Surface Mining Reclamation and Enforcement in 1993. He served in that post until September 1996. As Director, he managed an agency with a 300 million dollar budget and created new programs such as the Appalachian Clean Streams Initiative.

Prior to this post, Robert was Counsel and partner at McCutchen, Doyle, Brown and Enersen in San Francisco from 1986 to 1994. From 1983 until 1985, Robert was Counsel and Partner at White, Koch, Kelly & McCarthy in Santa Fe, New Mexico. His practice at these firms included representing clients in public lands, wetlands, endangered species, water law, zoning, timber and mining issues.

Robert worked at the Department of the Interior (1973-1983) in Washington. D.C.  and in Santa Fe, New Mexico. He worked at the Interior Board of Land Appeals and in the Solicitor’s office, where advised the Bureau of Land Management and other federal agencies on preparation of environmental impact statements, federal land use planning and mineral development, surface coal mining regulation, coal leasing and oil and gas leasing. From 1979 to 1980, Robert served as the Associate Solicitor for Surface Mining, where he served as chief counsel for the Office of Surface Mining Reclamation and Enforcement.

Robert is a Fellow in the American College of Environmental Lawyers.

Throughout his career, Robert has combined detailed knowledge of laws and regulations, high standards and a willingness to work long hours to find solutions to intrinsically challenging problems.

Robert has been instrumental in finding solutions to difficult issues on how the Federal government, States and Indian Tribes work together on coal mining reclamation.

Robert drafted and negotiated cooperative agreements with six states that resolved a dispute that arose over the extent of state authority to regulate surface coal mining reclamation on federal lands. The Congress adopted the cooperative agreement model in Section 525 of the Surface Mining Control and Reclamation Act of 1977.

As Director of the Office of Surface Mining Reclamation and Enforcement, Robert used a vision of “Shared Commitment” to improve contentious relations between his agency and the states and signed an agreement of Shared Commitment with the National Association of Abandoned Mine Land Programs.

Robert settled a lawsuit filed by the Navajo and Hopi Tribes who objected to a 1989 regulation that said the Department of the Interior had the sole authority to regulate coal mining on Indian Lands and recognized their inherent Tribal sovereignty.

Robert researched and drafted regulations to define the proper standards for the Bureau of Land Management to review 183 applications for preference right coal leases on 496,000 acres of land that contained more than 12 billion tons of coal. The regulations were upheld in NRDC v. Berklund, 609 F.2d 553 (D.C. Cir. 1979).

Robert provided the legal guidance for preparing a Programmatic Environmental Impact Statement under the National Environmental Policy Act to evaluate the effects of adopting a new federal coal-leasing program. He was also a primary author and reviewer of the document.

Robert defended the Surface Mining Control and Reclamation Act against existential challenges to its implementation. The courts rejected cases alleging that the Surface Mining Control and Reclamation Act violated the Fifth and Tenth Amendments of the United States Constitution, Hodel v Virginia, 452 U.S. 264 (1981); Hodel v. Indiana, 452 U.S. 314 (1981) and rejected a “bet the agency” challenge to the agency’s authority to set standards for state programs beyond the bare minimums specified in the SMCRA. In Re Permanent Surface Mining Regulation Litigation, Appeal of Peabody Coal, 653 F.2d 514 (D.C. Cir. 1981)(En Banc), denied, 454 U.S. 822 (1981).

Robert worked closely with the Army Corps of Engineers on the Special Area Management Plan for the San Diego Creek Watershed, the first watershed-wide comprehensive permitting plan in California for issuance of Section 404 permits.

Robert drafted the Organic Trade Association’s comments on the Department of Agriculture’s proposed National Organic Program regulations. The comments lead to the Department’s decision to reverse its proposal to allow use of sewage sludge and genetically modified organisms in production and use of irradiation in processing of organic food.

Robert has helped conserve habitat for endangered species and worked on many key habitat conservation activities in both Northern and Southern California.

Robert advice on the proposed listing of the California Gnatcatcher under the state and federal endangered species acts started the development community on the path that led to the passage of the State of California’s Natural Community Conservation Program and the development of multiple multi-species habitat conservation plans in Central and Southern Orange County, San Diego and Riverside and other jurisdictions.

Robert negotiated a Candidate Conservation Agreement for the Newhall Ranch with the Fish and Wildlife Service to support the conservation of the San Fernando Valley spineflower, a tiny plant once believed to be extinct in southern California.

Robert led a team that developed a plan for a six-mile long wildlife corridor through the Great Park to link the Cleveland National Forest to the Laguna Coast. The plan fulfilled a decades long effort by a coalition of conservation groups led by the Laguna Greenbelt.

Robert provided leadership and direction for the Office of Surface Mining Reclamation and Enforcement.

Robert started the Acid Mine Drainage Technology Initiative to develop technical standards to stop new mines from becoming a source of acid mine drainage. His work on the Appalachian Clean Streams Initiative served as a catalyst for the funding of hundreds of projects that have restored thousands of miles streams polluted by acid mine drainage.

Robert successfully defended the agency’s right to provide a federal backstop when state agencies failed to enforce the law under state primacy programs, defeating two bills, S. 1401 and H.R. 2372, which sought to remove this enforcement authority.

Robert issued a new mission and vision statement, streamlined agency processes and enhanced employee productivity by eliminating layers of unnecessary reviews and carrying out reviews under the Government Results and Performance Act to improve financial performance.

Robert has helped evaluate and comply with the complex requirements of the National Environmental Policy Act, the Clean Water Act, the Endangered Species Act, the California Fish and Game Code, among other laws.

Two of his projects were among the first new solar generation projects in Imperial County.