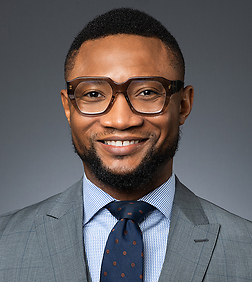 Segun Aluko is an associate in the Entertainment, Technology and Advertising and Corporate Practice Groups in Sheppard Mullin's Century City office.

Prior to joining Sheppard Mullin, Segun was a Business Affairs Executive at William Morris Endeavor where he collaborated with and counseled literary and talent agents on film, television, podcasts, and digital media deals. Segun started his legal career as an associate at the prestigious Nigerian law firm – Aluko & Oyebode – where he represented clients on corporate matters related to mergers and acquisitions, project finance, and general commercial transactions as well as commercial arbitration and litigation.

Segun received his LL.B. (Bachelor of Laws) from Obafemi Awolowo University, Ile-Ife, Nigeria, LL.M. (Master of Laws with Entertainment, Media, and Intellectual Property Certificate) from USC Gould School of Law, and M.B.A. (Master of Business Administration with specialization in Finance and Entrepreneurship) from UCLA Anderson School of Management.

Segun is also a licensed attorney in Nigeria and a public speaker at events that provide capacity building for artists, talent, and independent producers in the entertainment industry. Segun was recently named to Variety magazine’s Hollywood’s New Leader class of 2022.