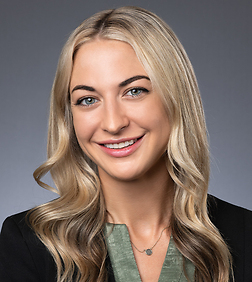 Taryn McPherson is an associate in the Business Trial Practice Group in the firm’s Los Angeles office.

Taryn represents clients in the digital media, food and beverage, construction, and hospitality industries. She litigates claims involving negligence, breach of contract, fraud, and other complex business disputes. Taryn has examined key fact witnesses; taken and prepared fact and expert witnesses for depositions; and drafted a variety of pleadings and motions, from the initial pleading stage through trial.

During law school, Taryn participated in the Hale Moot Court Honors Program and advanced to the semifinal round. She was subsequently selected for the USC National Moot Court team and awarded best brief at the Chicago Bar Association Moot Court Competition. She was also named Runner-Up Best Oralist at the Michael T. Thorsnes International Commercial Arbitration Competition and was selected to compete in the Willem C. Vis International Commercial Arbitration Moot held in Vienna, Austria.

In addition, Taryn held a supervisory role in the USC Intellectual Property and Technology Law Clinic, and counseled budding filmmakers, artists, game developers, entrepreneurs and nonprofits. She also worked with the clinic director to spearhead an intake initiative focused on women and minority-owned businesses.