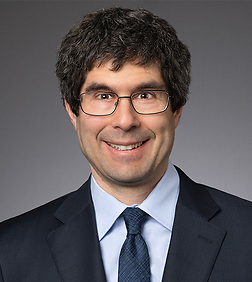 Darren Franklin is a partner in the Intellectual Property Practice Group in the firm's Los Angeles office.  He is a registered patent attorney with an active IP litigation and prosecution practice.  He additionally serves on the firm’s e-discovery, life sciences, and trade secrets teams.

Darren represents both large and small companies, as well as individuals, who want to protect their innovations in the U.S. Patent and Trademark Office or who have been accused of infringing the intellectual property rights of others in the U.S. district courts.  His clients are involved in diverse industries, including aerospace, consumer products, electronics, healthcare, laboratory equipment, life sciences, manufacturing, medical devices, transportation, and video games.

Over his career, Darren has appeared in more than seventy U.S. district court cases across the country and obtained countless U.S. and foreign patents for his clients.  His experience includes representing clients before the Patent Trial and Appeal Board in adversarial “inter partes review” proceedings to invalidate patents.  Additionally, Darren has personally argued five patent cases before the U.S. Court of Appeals for the Federal Circuit in Washington, D.C.  Among these cases was one of the first appeals based upon the patent ineligibility of abstract ideas in the wake of a 2014 Supreme Court case.  In addition to representing clients in intellectual property litigation and prosecution, Darren manages intellectual property portfolios, provides patent risk assessments for new products, and conducts intellectual property due diligence for corporate transactions.

Darren is a past president of the Los Angeles Intellectual Property Law Association, one of the nation’s premier intellectual property law associations.  He is also a Certified eDiscovery Master by the Arkfeld eDiscovery Education Center and a long-time member of Sheppard Mullin’s E-discovery Team.  Additionally, Darren has completed forty hours of mediator training through the Straus Institute for Dispute Resolution at Pepperdine Caruso School of Law.  Darren is a graduate of Stanford Law School in 2000 and earned an undergraduate degree in physics and political science from the University of California, Berkeley.

Darren is committed to achieving the best results for his clients, and enjoys working with companies and businesses that are innovative and forward-thinking.