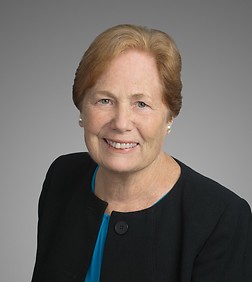 Prior to her retirement, Joan’s practice emphasized real estate investment, financing and leasing transactions. Her clients included developers, institutional and foreign investors, corporate real estate users, pension funds and pension fund advisors and lenders. Her experience encompasses land acquisition and development, construction, permanent and tax-exempt financings, joint venture and limited liability entity formation, acquisition and disposition of commercial properties, leasing and other portfolio management issues, as well as loan and partnership workouts. She developed a particular expertise in the hospitality and senior housing areas and in the structuring of Islamic investment in US real estate.

Joan's clients included DHL Express, for whom she has handled leasing, facilities development and related financing matters throughout the United States; the San Francisco Transbay Transit Center in connection with facilities management and leasing of retail, restaurant and entertainment spaces at the Center; MacArthur Transit Community Partners, the developer of a 624 residential unit transit-oriented village on land leased and purchased from BART; and Chevalier International Holdings, Ltd. in connection with its investment in senior assisted living facilities and medical office buildings throughout the United States.

Represented MacArthur Transit Community Partners, an affiliate of BRIDGE Housing Corporation, in developing the MacArthur BART Transit Village. The 624 residential unit project included the construction of a BART Garage on land to be acquired for BART; a 90-unit, below-market rental phase to be constructed on land ground-leased from BART; and three market-rate phases with market-rate and below-market condominiums, 4,500 sq. ft. of retail and commercial space, 5,000 sq. ft. of community space, and related off-site improvements. Funding for the project derived from a combination of Proposition 1C grants, a federal transportation grant, tax-increment financing and private debt capital.

Counsel to the Transbay Joint Powers Authority in connection with the negotiation of the master asset management agreement for, and individual tenant leases for all retail, restaurant and entertainment spaces in, the new Salesforce Transbay Transit Center.

Represented DHL Express in connection with a major expansion of a primary hub at Wilmington, OH, the financing of the expansion through private activity bonds issued by the Dayton Montgomery County Port Authority and the subsequent divestiture of the hub facility.

Represented DHL Express in ground-leasing, constructing and financing a number of regional distribution and sortation facilities, including the development, installation and financing either through private activity bonds or leveraged leases of state-of-the-art sort systems.

Represented Lend Lease Corporation in connection with the development of the Watermark luxury high-rise condominium project and the negotiation of a development and disposition agreement and related ground lease for the development of a proposed mixed-use cruise ship terminal facility to be located on Piers 30-32 in San Francisco.

Represented investment groups acquiring and selling commercial real estate assets and portfolios, including ownership interests in the Santa Barbara Biltmore Hotel, the Parker House in Boston and the Parc 55 Hotel in San Francisco.

Represented major international spirits companies in connection with the acquisition, sale and lease of vineyard properties and wineries in the Napa and Sonoma Valleys and elsewhere in California, including the sale and leaseback under a long-term lease of 18 vineyard and winery properties in the Napa Valley. Recently concluded the representation of Diageo plc in the sale of its U.S. and British wine units to Australia’s Treasury Wine Estates for $552 million.

Member, Port of Oakland Board of Port Commissioners; President 2017-2018