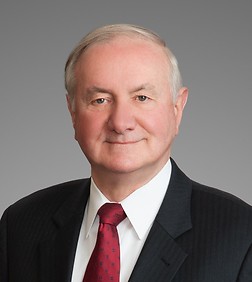 Robert Magielnicki is Of Counsel in the Antitrust and Competition Practice Group. He has a multi-disciplinary practice and engages in a diverse commercial practice with emphasis on antitrust, domestic and international business transactions and complex civil and criminal litigation.

Robert has more than 40 years of experience in the fields of antitrust and competition and business law, both domestically and internationally, including having served as General Electric's (GE's) Associate Litigation and Antitrust Counsel. He also served as the Division General Counsel of GE’s Factory Automation Products Division in Charlottesville, Virginia, and was counsel to GE at its corporate headquarters in Fairfield, Connecticut.

Robert represents clients in corporate and commercial matters, including companies engaged in telecommunications, aerospace and defense, semiconductors, consumer goods, commercial and industrial products, pharmaceuticals and healthcare. He also has represented a diverse array of clients in acquisitions, dispositions and joint ventures, both domestic and international, as well as in numerous complex contracting and licensing matters. His clients range from privately-owned to Fortune 100 companies and include both domestic and foreign corporations.

On the international front, Robert has represented clients in transactions that include acquisitions, dispositions, joint ventures, distribution arrangements and licensing agreements. He also has represented clients in investigations by the Competition Directorate of the European Union, as well as the national competition authorities of a number of European and South American countries, and the Japan Fair Trade Commission.

Who's Who in America

J.D., Cornell Law School, 1970, with distinction, Order of the Coif