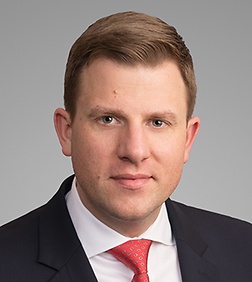 Justin Bernbrock is a partner in the Finance and Bankruptcy Practice Group in the firm's Chicago office.

Prior to private practice, Bernbrock served with distinction as an Aviation Warfare Systems Operator in Patrol Squadron FIVE and as a Weapons Tactics Instructor in Patrol and Reconnaissance Wing ELEVEN. During his nearly 10 years of active duty in the United States Navy, Bernbrock was awarded the Navy Commendation Medal twice, including once for meritorious service during combat operations in Iraq.  He also received the Global War on Terrorism Medal for his service in Kandahar, Afghanistan.

AutoMedx — Represented AutoMedx, LLC, a leading designer and manufacturer of medical ventilators, in its sale to affiliates of Water Street Healthcare Partners.

Alpha Media Holdings LLC — Representing Alpha Media Holdings LLC and 15 of its subsidiaries in their prearranged chapter 11 cases in the United States Bankruptcy Court for the Eastern District of Virginia.  Alpha Media is the largest privately-held radio broadcast and multimedia company in the United States, which owns or operates more than 200 radio stations that provide local news, sports, music, and entertainment to a weekly audience of more than 11 million listeners in 44 communities across the United States.  Alpha Media’s prearranged chapter 11 cases were confirmed in just over 60 days and contemplated transactions that eliminated all of the Debtors’ prepetition funded debt obligations and provided the debtors with more than $120 million of exit financing.

Seadrill Partners LLC — Representing the Conflicts Committee of the Board of Directors in connection with matters between the Company and the operator of its off-shore assets.

Neiman Marcus Group — Representing the liquidating trustee, in the U.S. Bankruptcy Court of the Southern District of Texas, in the resolution of over 2,800 general unsecured claims in accordance with the debtors’ chapter 11 plan of reorganization.

CLMG Corp. ― Representing CLMG Corp. in its capacity as agent for the real estate term loan lenders in the BJ Services, LLC chapter 11 proceedings pending before the United States Bankruptcy Court for the Southern District of Texas. BJ Services is a leading provider of hydraulic fracturing and cementing services to upstream oil and gas companies engaged in the exploration and production of North American oil and natural gas resources.

CSC Generation Holdings, Inc. ― Representing CSC Generation Holdings, Inc. in connection with its successful acquisition of substantially all of the operating assets in the Sur La Table chapter 11 proceedings pending before the United States Bankruptcy Court for the District of New Jersey. Sur La Table is one of America’s most highly regarded retailers of home kitchenware products. Prior to filing chapter 11, Sur La Table had grown to 126 retail locations across the country and a significant online retail presence.

Z Gallerie, LLC — Represented Z Gallerie, LLC, a leading specialty retailer focused on fashion and art-conscious home décor with retail locations across the United States and a significant e-commerce platform, in its Chapter 11 case in Delaware.

Sizmek Inc. — Representation of Sizmek Inc. and its affiliates, a leading online advertising campaign management and distribution platform for advertisers, media agencies, and publishers, in its out-of-court, balance-sheet restructuring of more than $150 million of funded indebtedness.

Avaya Inc. — Representation of Avaya Inc. and certain of its affiliates in their Chapter 11 cases in the U.S. Bankruptcy Court for the Southern District of New York. Avaya is a leading multinational technology company that specializes in telephony, wireless data communications, customer relationship management software, and networking. Avaya and its debtor-affiliates had more than $6 billion in funded debt obligations as of the commencement of their Chapter 11 cases, with annual revenues in excess of $3 billion. In 2018, the Turnaround Management Association recognized the successful restructuring of Avaya Inc. with its “Mega Company Transaction of the Year Award.”

Sequa Corporation — Representation of Sequa Corporation in its successful refinancing and out-of-court restructuring of approximately $1.9 billion of funded indebtedness. Pursuant to the consensual restructuring, Sequa obtained a significant new money investment, its senior credit facilities were refinanced in full, and over 90 percent of its unsecured notes were exchanged for new convertible preferred equity.

Penn Virginia Corporation — Representation of Penn Virginia Corporation in its prearranged Chapter 11 restructuring in the United States Bankruptcy Court for the Eastern District of Virginia. The Company filed for Chapter 11 with a support agreement with all of its secured debt and a supermajority of its unsecured debt regarding a transaction that will reduce the company’s long term debt from approximately $1.2 billion to approximately $128 million. Penn Virginia is an independent oil and gas company engaged in the exploration, development, and production of oil, NGLs, and natural gas. The company’s operations are focused on oilfields primarily in the Eagle Ford shale in South Texas, with additional properties in the Granite Wash in Oklahoma and the Marcellus Shale in Pennsylvania. In 2017, the Turnaround Management Association recognized the successful Penn Virginia restructuring with its “Mid- Size Company Transaction of the Year Award.”

Magnum Hunter Resources Corporation — Representation of Magnum Hunter Resources Corporation and its subsidiaries, an independent exploration and production company engaged in the acquisition, development and production of natural gas, natural gas liquids and crude oil, primarily in the States of West Virginia and Ohio, in its Chapter 11 cases in the United States Bankruptcy Court for the District of Delaware.

Patriot Coal Corporation — Representation of Patriot Coal Corporation and certain of its affiliates, producers and marketers of coal in the eastern United States, in their Chapter 11 proceedings before the United States Bankruptcy Court for the Eastern District of Virginia. As of the petition date of May 12, 2015, Patriot and its affiliates had funded debt of approximately $790 million as well as significant and complex legacy and environmental liabilities.

Midstates Petroleum Company, Inc. — Representation of Midstates Petroleum Company, Inc., an independent exploration and production company, in a series of transactions to increase its liquidity. The transactions included a private offering of $625 million of senior secured second lien notes, an exchange of existing unsecured senior notes for approximately $504 million of senior secured third lien notes, and an amendment to its existing revolving credit facility to allow for the senior secured second lien notes issuance, the exchange transaction and to provide additional covenant flexibility.

Longview Power, LLC — Representation of Longview Power, LLC and certain of its affiliates, including Mepco Holdings, LLC and its affiliates, in connection with their Chapter 11 cases involving the restructuring of approximately $1 billion in funded debt. Longview operates a 700 net megawatt supercritical coal fired power generation facility in Maidsville, West Virginia, and Mepco is one of the largest independent coal companies in North Appalachia. Together, Longview and Mepco operate an integrated power generation enterprise that is at the forefront of the clean coal movement.

Sorenson Communications, Inc. — Representation of Sorenson Communications, Inc. and its affiliates, together the leading provider of telecommunications services and technology for hearing impaired individuals, in their Chapter 11 cases. Utilizing a “straddle” solicitation to confirm its plan of reorganization in 38 days, Sorenson successfully restructured approximately $1.3 billion of funded indebtedness, paid all general unsecured claims in full, and returned value to existing equity holders.

Dex One Corporation — Representation of Dex One Corporation, a leading provider of yellow-page and digital directories and marketing services, in its prepackaged Chapter 11 merger of equals with SuperMedia Inc. Dex One and SuperMedia, both publicly traded companies, filed separate but parallel prepackaged Chapter 11 cases to consummate their stock-for-stock merger, amend or reinstate over $3.3 billion of funded debt obligations of the two companies, and maintain shareholder equity value in the combined enterprise. Holders of general unsecured claims received full payment under the plans. The combined company is known as Dex Media, Inc.

Think Finance, LLC — Representation of Victory Park Capital and certain of its affiliates in connection with Think Finance’s Chapter 11 cases in the United States Bankruptcy Court for the Northern District of Texas. Think Finance is a leading provider of financial technology services.

SunEdison, Inc. — Representation of SMP Ltd. and LOTTE Fine Chemical Co., Ltd. in connection with the SunEdison Debtors’ sale of their Solar Materials Business. SMP operates a polysilicon manufacturing facility in Ulsan, Korea, and LOTTE manufactures and sells chemical products in Korea and throughout the world.

Syncora Holdings Ltd. — Representation of Syncora Holdings Ltd. and certain of its subsidiaries in connection with the City of Detroit’s Chapter 9 case, the largest-ever municipal bankruptcy filing. Syncora, through subsidiaries, insured or held a substantial amount of the City of Detroit’s municipal finance debt obligations. After more than a year of vigorous litigation regarding multiple elements of Detroit’s bankruptcy filing and proposed plan of adjustment, Syncora and Detroit entered into an innovative settlement that resolved all outstanding issues between the parties, delivered substantial value to Syncora and its subsidiaries, and created the foundation for Syncora’s long-term partnership with and real-estate development and other investment in Detroit.

Liberty Partners, L.P. — Representation of Liberty Partners, L.P., and certain of its affiliates in connection with Edgenet, Inc.’s Chapter 11 case, which is currently pending before the United States Bankruptcy Court for the District of Delaware. Through its affiliates, Liberty was Edgenet’s prepetition secured lender and, separately, its primary equity interest holder. In the course of the Chapter 11 cases, Edgenet sold substantially all of its assets in a sale under section 363 of the Bankruptcy Code.